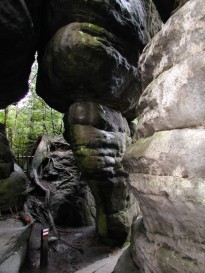 The area of strict protection called Errant Rocks has 22 hectares. It contains a group of unusual rock forms about 6 - 11 meters high, created as a result of absondering sandstone weathering. Errant Rocks is a labyrinth of crevices and recesses, sometimes very narrow, separating several meters high rock blocks. Many rocks have their own names, for example: "Rock Saddle", "Hen's Foot", "Labyrinth", "Tunnel", "Big Chamber". Near Errant Rocks there is the "Three Crosses Boulder". Once it was a very well guarded customs point between Klodzko County and the Czech Kingdom. There are many dates on the boulder which, as the legend says, were engraved to commemorate catching the smugglers. The oldest one comes from 1616. On the area of Errant Rocks there is a point of observation on a platform called "Rock Bowls". From there we can see both Szczeliniec Wielki and Maly, Broumovska Vrchovina, the town Machov, and when there is good visibility, we can also see the Karkonosze!

Do you want to know more? Choose the topic: