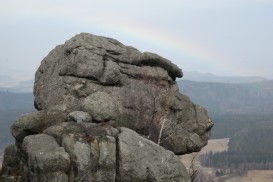 Szczeliniec Wielki (919 m) - the highest peak of the Table Mountains is an exceptional tourist attraction in Poland. It is the remain of the highest level of the Table Mountains, where erosion sculptured magnificent rock forms. The most famous are: "Hen", "Mammoth" (also called "Ape Man"),"Camel", "Princess Emilka's Head", "Elephant", "Pulpit". A very interesting part of Szczeliniec Wielki is the so called "Little Hell". It is a crevice 100 meters long and about 20 meters deep with specific microclimate characteristic of low temperature and high air humidity. Because of the climatic conditions there is snow on the bottom of the crevice until mid June. There are 680 stairs made of stone leading to the top of Szczeliniec. They were built between the 18th and 19th century by Franciszek Pabel and after some alterations they have served until today. Szczeliniec Maly on the south-east of Szczeliniec Wielki, separated by a not very deep mountain pass is not allowed to visitors.

This is worth seeing!...

Do you want to know more? Choose the topic: